Twenty minutes after the start of the 1982 sci-fi film tronwe’re transported to Flynn’s, a bustling downtown hangout filled with dozens of cacophonous arcade machines, many with dystopian names such as The end, Code Wars and Space paranoids.

Arcadia, handcrafted in Bellême, Normandy by Hervet Manufacturier, is an attempt to capture the magic of Flynn – and indeed this entire era of gaming – in one supremely lavish piece of furniture. The two men behind, Cédric and Nicolas Hervet, are cousins ​​from a family of craftsmen for four generations, although Cédric was also creative director of electronic music legends Daft Punk. The retro-futuristic aesthetic of this group finds echoes in Hervet artwhich include skateboards, streetlights, table football tables and sound installations, some of which can be seen in their Parisian showroom on rue Volney, a stone’s throw from the Ritz.

Arcadia is probably their signature piece: a paldao veneer cabinet with Atomic Age design accents, concave arcade buttons, American-style joysticks, a Bose SoundTouch audio system, and an ultra-low latency Full HD monitor. Crucially, it also has a catalog of 3,000 arcade-era and 8-bit games, including Pac man and space invaders. Those of a certain age will remember the impact of those early video games; 8-bit consoles such as the Nintendo Entertainment System (NES) would sell tens of millions of units worldwide.

Minecraft’s global popularity reminds us that realism isn’t everything

While Arcadia is clearly an exercise in nostalgia, its games still have an inherent appeal, even when today’s equivalents focus on graphical realism and Hollywood-style special effects. Indeed, the worldwide popularity of Minecraft is a clear reminder that realism isn’t everything and engaging gameplay can make up for a lack of color and detail. In its unique, somewhat extravagant way, Arcadia shows us that space invaders, Pac man and Galaxian don’t suddenly become terrible because Grand Theft Auto exist. Built to order, it allows those with deep pockets to celebrate one of the most enduring elements of 80s culture without irony. Hervet Manufacturer Arcadia, €23,800, hervet-manufacturier.fr

Now listen to this

Headphones are always good candidates for forays into retro design; If you fancy listening to music while sounding like a 60s telephone operator or an 80s rollerblade, there are options. Jonathan Levine founded Master & Dynamic when he saw a pair of headphones from the 1940s in a museum, and you can draw a line between these MW75s and classic headphones such as the Koss SP/3. But how do they sound? Quite special. The dynamic beryllium drivers deliver highly detailed highs and solid bass response without being overwhelming. Passive noise reduction combines with state-of-the-art active noise cancellation to achieve almost supernatural sound isolation. Master & Dynamic MW75 headphones, £549, masterdynamic.co.uk

What is your gender?

A decade ago, few would have predicted the rise in popularity of mechanical keyboards, but these days the gaming fraternity loves to emulate the click-clack of an old IBM. This burly man combines that 80s tactility with the style of a classic typewriter: it has 83 round keys slightly reminiscent of an antique model from the 19th century. Its weight is partly due to the inclusion of 5W speakers made by JBL, and if you’ve never heard hip-hop come out of a typewriter, I can tell you that the Rocksete demonstrates it with panache. . With a carry handle that doubles as a tablet or phone stand and an included laptop stand, it makes for a unique workstation. Knewkey Rocksete mechanical keyboard, £449.99, andana.shop

In the mid-1970s, Swiss watchmakers Girard-Perregaux produced a futuristic watch that had no name, just the reference number 9931/34/39. He obviously lacked a nickname, and he quickly got one: the Cap. Unique, her face was empty. The time, displayed with red LEDs, was visible through a narrow side panel. One of his three models, in sleek black Makrolon polycarbonate, has become highly sought after by collectors. The Cap 2.0 faithfully recreates this design in black ceramic and titanium, with a few extra bells and whistles that would have caused gasps of amazement in the summer of 1976, such as a date display and a stopwatch. Girard-Perregaux Cap 2.0, £3,600, girard-perregaux.com

In an age where Bluetooth speakers are incorporated into everything from baby seats to picnic blankets, it’s rather unusual to extol the virtues of one that looks, well, like a speaker. But this unit has a genuinely attractive mid-century appearance, with walnut veneer, a fabric grille, and knobs that wouldn’t look out of place on an X-ray. The sound quality is far from retro, however. While it may only seem appropriate for a few light classical tunes or expedition previews, it can be cranked up to what you might call “surprising” without distortion. It’s not the kind of unit you’d take to the beach, but if you’re looking for something sonically impressive that pays homage to your grandparents’ furniture, this is it. Edifier MP230 Bluetooth speaker, £99.99, amazon.fr 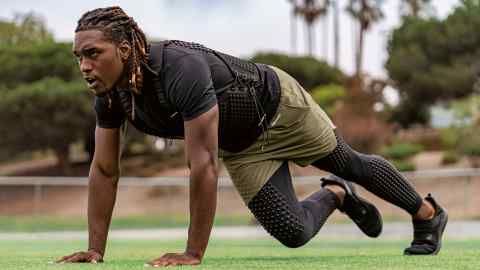