A business owner was shocked when electrical appliances worth thousands were stolen in a burglary at his store.

iPhones, iPads and tablets were taken from Zaid Durrani’s Gadget Care on Bow Street in Keighley town center by two yobs in the early hours of Friday morning.

CCTV footage shows the suspects each throwing a huge mountain boulder at the store’s entrance window.

This is followed by the pair crawling under the shutter before going behind the counter.

Once there, an individual can be seen kicking through another door to access the items which are then placed in bags. 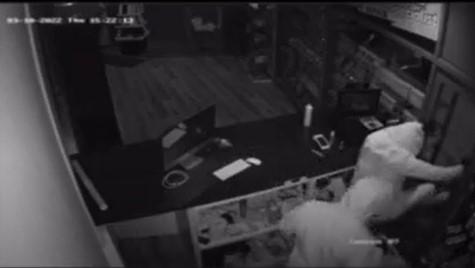 Police say they are investigating the incident and encourage anyone with information to come forward.

The store had only recently reopened after a renovation.

Mr Durrani, who also owns the nearby Phone Care store, said: “It’s a terrible situation. I’m quite stressed out about it all at the moment.

“This is the first time in my life that this kind of thing has happened.

“In three minutes and 40 seconds, they stole iPhones, iPads and tablets. They couldn’t carry heavy items like the PS5s we have.

“They smashed the front door with a mountain rock and broke through security on the shutter.

“The alarm went off through my mobile app. As soon as they put their head in the store, the sensors went off.

“I woke up at 3:21 a.m. to my phone ringing. I told my wife to call the police, which she did immediately.”

Mr. Durrani will continue to lose money until the damage is repaired.

He added: “The store will be closed until the new door and shutter are installed.

“I’ve already ordered them but they say it takes up to seven days. The whole frame has been done so I have to change everything.”

A force spokesman said: “Police are investigating a burglary at a shop in Bow Street, Keighley.

“Suspects broke into the store in the early hours of Friday morning and stole a large amount of electrical equipment. Investigations are ongoing.